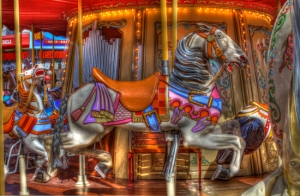 I normally like carousels…don’t get me wrong.  They tend to evoke happy emotions and visceral memories of innocent childhood fun.  There is just something about the deeply resonant tones of the piped in organ music and the gentle circular motion that makes it all so soothing.  Maybe it is tied to my love of horses and the fact that I never did receive that pony I asked for each Christmas.  Whatever the reason, as an adult I am always drawn to carousels like metal to a magnet.  To watch the intricately painted animals circle by in their hypnotic up and down rhythm.  To hear the echoing tones of the Calliope music fill the air from afar.  To be transported if but for a moment into the past when the promises of life seemed boundless.

For the most part these colorful contraptions appeal to that wide-eyed child deep within.  But they also tend to stir up something far more sinister should I linger; the dark shadows of the past that rode along with that innocence.  The intense moments of fear that consumed every fiber of my being.  When I was pulled towards this particular carousel in Pier 39, I approached it with childlike anticipation.  Yet there was something about the look on the faces of the horses that made me take pause.  Ears pinned back, mouths open wide and legs positioned in an all out run.  A carousel stampede in the making.  A frozen yet tangible moment of fear carved forever on their faces.  What was going through this artist’s head when he carved these figures?  Most likely some of the same things that passed through my own when I decided to snap this photograph.