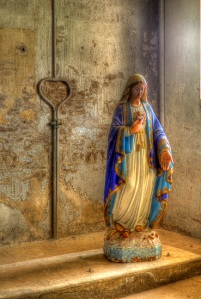 I mean no disrespect to those who have chosen Catholicism as their faith, nor any other faith for that matter.  To each their own I say.  But what is it about the Virgin Mary?  In every statue, in every painting, on every faded window sticker, she appears to be so calm and at peace.  Think about it for a second; if any one of us had to go through even half of what she purportedly did, I doubt we would come through it all with such a great attitude.  First off, she finds herself with child without ever having had relations with a man.  To make matters worse, she then has to wander around the countryside on the back of an Ass during her ninth month of pregnancy.  Those of us who were fortunate enough to bear children, know how uncomfortable we were just getting up and down  from a couch, let alone hefting that bulging package up on top of a donkey.  She travels with a man she barely knows who wed her to protect her honor and then stops in some shanty town in the middle of nowhere to give birth to her baby on a pile of scratchy hay in some dusty manger surrounded by a variety of livestock.  Strange men in long robes soon gather round and gawk at her newborn child as they play loud drums, bear odd gifts and spout outlandish statements.   They tell her of all things, her baby is the newborn Savior of the World, the son of God, and that when it comes down to it, he really is God.  So, if God is his father, and at the same time she gave birth to God (I know, it’s confusing) then why did she have to settle for this lowly carpenter with a common name like Joe?  All she probably wanted to do at that moment was sleep…or scream for that matter.  She was only human after all. 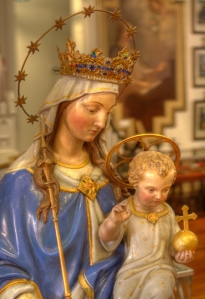 This beautiful Madonna set the bar for all future mothers in the world.  It’s no wonder we have such grand expectations of our children and ultimate disappointment with their choices.  Who can compete with a woman whose son grows up to be such a Superhero in the eyes of the masses?  The sad part is she received little credit for raising such a nice son.  Oh, he did have his moments.  Like the time he got really pissed off, went into the temple, threw around the tables, cursed at the vendors and smashed all their wares.  His mother must have been furious when he got home.  He also liked to hang out downtown with a few of the more unsavory characters in life.  Lepers, criminals and prostitutes.  But he had a big heart and loved them for who they were.  Something tells me he didn’t learn that from his father Joe in carpenter’s school.  No, that had to be passed on through the DNA of one of  the greatest woman of them all, his mother Mary.

None of us should have to outlive our own children.  But that is exactly what Mary had to do.  Not only did she outlive him; she bore witness to his torture and eventual death.  I personally cannot imagine standing by in a passive manner while my own child is being brutalized before me.  No, I believe I would be one hell-bent screaming banshee with a mission to annihilate his captors and save my son.  However I won’t sit here in judgment.  Things were very different for women in that archaic time.  Mary was expected to be silent and to do whatever a man told her to do.  I don’t know about you, but if I was expected to do the same, I would most definitely not walk away from the experience with a peaceful demeanor.  No, the look of despair, unhappiness and emotional exhaustion would be etched permanently across my face.  I suppose modern-day statue and sticker makers thought it important to create a version of this Blessed Virgin with the look of peace on her face for the sake of sales.  I mean, who would want to purchase and then pray the Hail Mary before a statue whose face was twisted in pain and angst over such an unfortunate accumulation of life experiences?  Not me.  This iconic look of purity and peace somehow provides us with a sense of hope.  The hope that sacrifice in life ultimately returns reward, even if the reward follows death and is cast onto the face of a plaster statue that rests in some dark, cold room in an abandoned reformatory for boys.