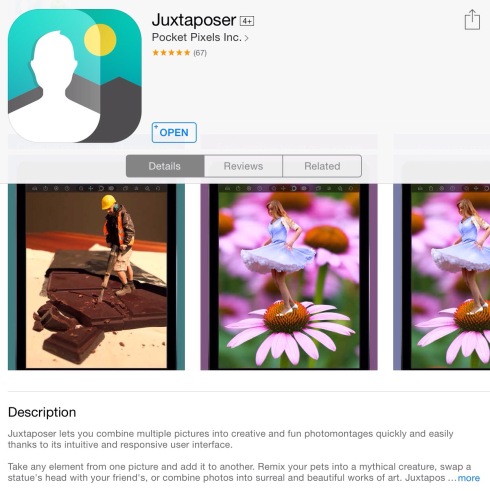 One of my favorite mobile photography editing apps is Juxtaposer. This app is the mobile photomontage artist’s dream app. It was Juxtaposer that first opened the doors of my creative imagination when I transitioned to shooting and editing with an iPhone. For years I had used Photoshop for traditional DSLR photography editing and had played with a few montage creations. However, I found the use of PS for this type of editing to be time consuming, tedious, and it had a steep and somewhat complicated learning curve for the tasks involved.

I first noticed a number of mobile artists creating amazing photomontage work on the iPhoneArt.com website back in 2011. I was blown away by what these artists were creating on their iPhones and ultimately iPads. I followed several conversations and soon learned about the Juxtaposer app. From the first day I downloaded the app I was hooked. At the time the app was iPhone only and the iPhone screens were not nearly as large as they are today. So imagine me bent over my miniscule iPhone screen erasing details of photographs in order to save one small piece as a stamp to combine with another background photo. Talk about tedious! But the fact I could use my fingers to pinch and zoom and an inexpensive stylus to touch up the details made the experience fun and a lot cheaper than Photoshop and a Wacomm tablet. Plus I could say that I created these pieces from start to finish on my iPhone! 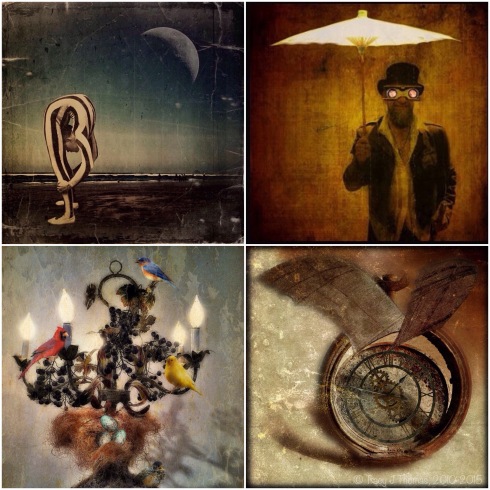 **A few of the pieces I have created with the Juxtaposer app and favorite texture apps.**

As time went, on my iPhone photomomtage pieces all created with Juxtaposer and a few texture apps, began to place in competitions and find their way into galleries, private collections, and publications around the globe. After taking a break from several productive years creating mobile art, I have recently migrated back to using Juxtaposer on my iPad to create illustrations for a new book I am in the process of writing. The fact I can edit with this app on my iPad has improved the user experience ten-fold. Below are some of the steps I took in the app when creating a piece for the book. **Note: this piece is far from finished but I thought it would be fun to share a work in progress while highlighting this app.**

First I chose the base elements that would go into my photomontage based on a concept I had in mind.

**This is the background photo I chose. I shot this several years back in Baja, Mexico.** 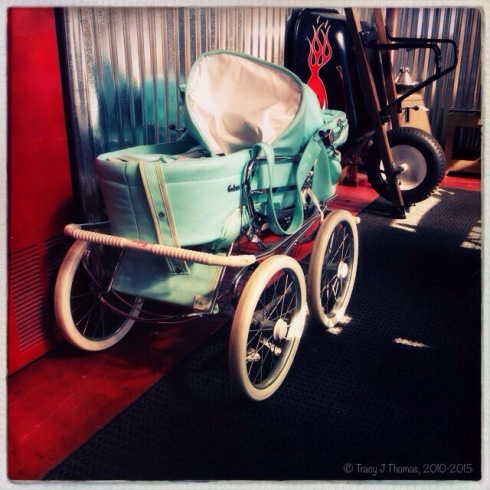 **I decided I wanted this baby carriage as part of the scene. I shot this photo in a vintage auto parts store many years back.**

I opened Juxtaposer, started a new session, and I chose my bottom and top images and imported. 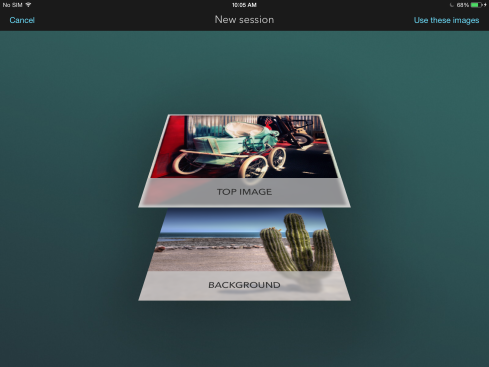 I needed to erase everything on the top layer but the baby carriage. To do this I chose the eraser button and began to pinch and zoom the top image in order to get in close to the edges for detail.

When I was happy with the results, I saved the top image as a stamp so I could use it again in the future. I also decided to flip the carriage so it angled towards the cactus for better composition (another tool I love in this app). 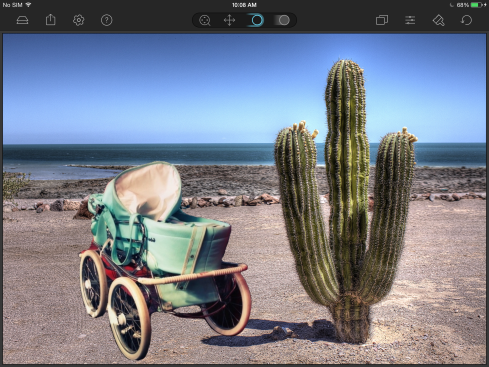 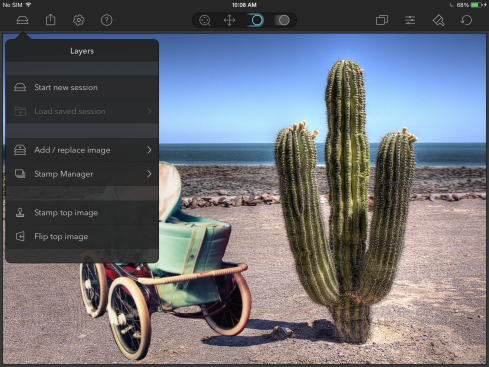 After saving my newly created base scene, I added my main character, The Borg, from my saved stamps. 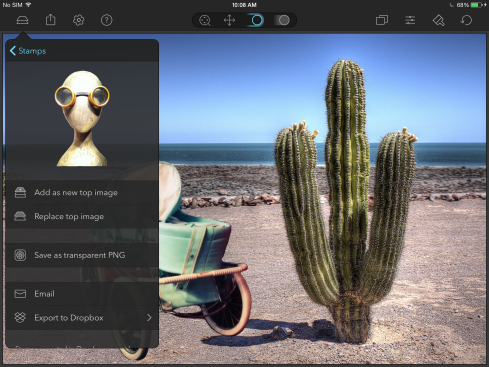 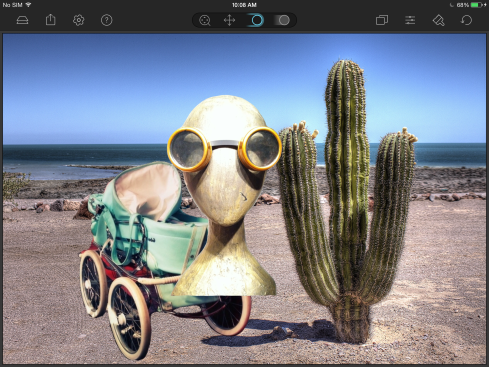 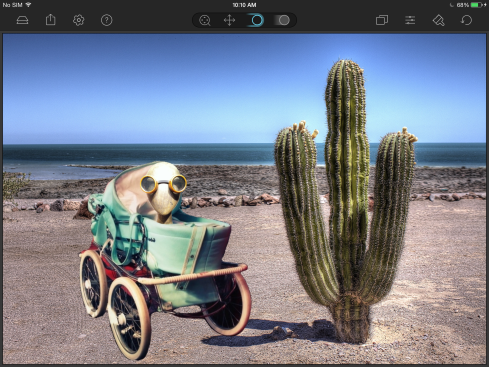 I then began to add more stamps to the scene, in this case the hat and pacifier. 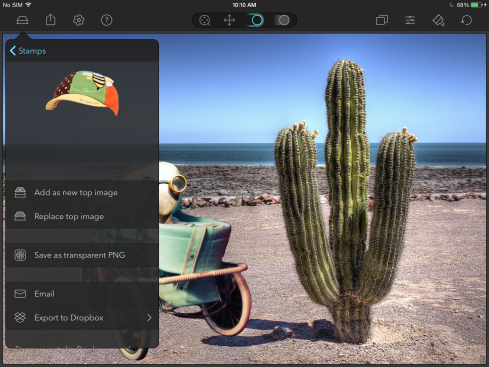 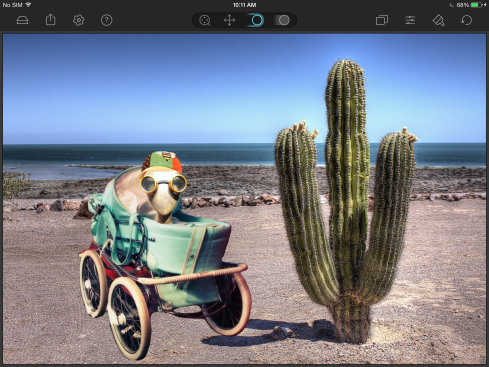 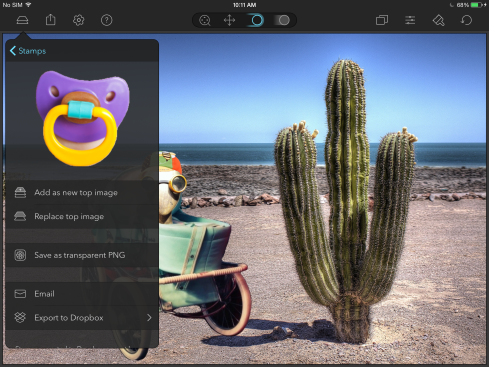 Now that I have incorporated all my main core elements I will continue to touch the scene up by adding shadows to anchor the carriage a bit better to the ground so it doesn’t appear to be floating plus a few more items to finish the scene to my liking. This will be followed by importing the piece into a few of my favorite mobile photo texture apps.

A few of the other tools in Juxtaposer are the ability to adjust brightness, contrast, saturation, opacity, blend modes, and brush settings. my favorite feature of all is the unerase button which comes in handy when attempting to erase close to the edges. Unlike a reset button, it allows you to unerase small parts of your top layer and does not reverse all the work you just painstakingly labored over. 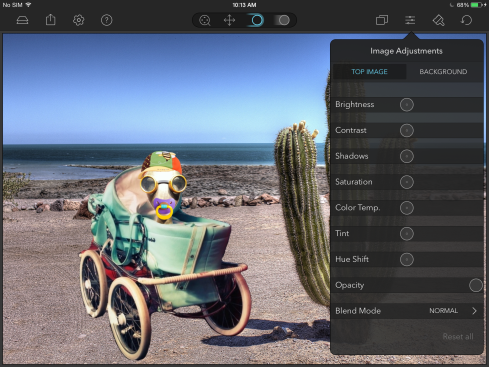 All in all Juxtaposer is a fun app with an intuitive interface for both the beginner and advanced mobile artist.

Zen in the Garden

See the giveaway details
at Goodreads.