We Are Women and We Roared! 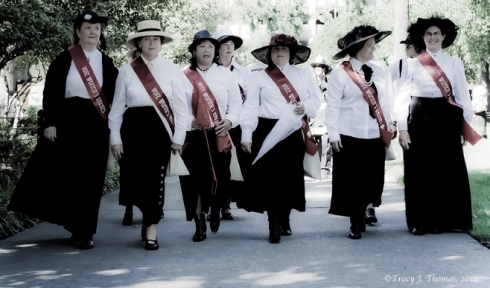 To say that I am ecstatic today would be an extreme understatement. I am so much more than that emotion, but it is virtually impossible to match a word with how I feel.

Election night was incredible. I shouted, I cheered, I laughed, I cried. Once again I found faith in my fellow Americans. Not only did they rise to the occasion and vote Barack Obama back into office for a second term, they also voted strongly for women and women’s rights.

Following an extremely contentious campaign season that saw a plethora of Republican candidates spouting insensitive and misogynistic statements about rape, incest and a woman’s right to choose, Americans responded, and in a big way.

New Hampshire became the first state in U.S. history to elect an all female contingent. The Governor, the House, and the Senate; all women. They include Gov. Maggie Hassan (D) and Reps. Carol Shea-Porter (D) and Ann McLane Kuster (D) who join the Senate incumbents, Jeanne Shaheen (D) and Kelly Ayotte (R).

Wow! Can it get any better than this? Yes!

Tammy Baldwin (D) becomes the first female and openly gay Senator by way of Wisconsin, after voters showed their belief in her abilities. Baldwin won this race by holding off a political comeback by popular former Gov. Tommy Thompson who had never lost a statewide race.

Mazie Hirono becomes the first Asian-American woman to be elected to the Senate and Hawaii’s first female Senator.

Then there is Iraqi war Veteran Tammy Duckworth (D-Illinois) a helicopter pilot who lost both legs and part of the use of her right arm in an explosion during combat, and was awarded the Purple Heart for her injuries. Duckworth defeated Tea Party incumbent, Representative Joe Walsh for the Congressional seat in her district.

Tulsi Gabbard (D-Hawaii) was elected to the US House of Representatives as the first ever practicing Hindu. Gabbard “voluntarily served on a 12-month tour of duty with Hawaii’s National Guard, and then became the first woman in the history of the Accelerated Officer Candidate School at the Alabama Military Academy to be designated a ‘distinguished honor graduate.'”

Altogether, the 113th Congress will have at least 20 female senators and the House of Representatives at least 77 Congresswomen, more than at any other time in U.S. history.

And of course there are all the female Representatives who were elected to their State Assemblies. Among them my friend Sara Gelser (D-Corvalis) who was re-elected to Oregon’s District 16.

I have had the honor to know Sara for many years. Her strong sense of integrity and fearless drive to fight for the rights of others less fortunate than most, has always impressed me. Sara is the youngest woman in the Oregon Legislature and has served since 2005. She is the Assistant Majority Leader, Chair of the House Education Committee, serves on the Revenue Committee and the Rules Committee, and President Barack Obama appointed her to the National Council on Disability. The nomination was confirmed by a unanimous vote of the US Senate. In my educated opinion, the future of U.S. politics has “Sara Gelser” written all over it.

Each one of these women is a hero to me, no matter their political affiliation. They have fought the battle, and against the odds, are rising to the top of their game in a man’s world. They serve as positive role models for our daughters, and are paving the way for all women now and into the future.

As I reflect on this historical time in our country I am still in agony over my attempt to describe in words the raw emotion that continues to rise inside. So, instead of attempting to put words to how I feel, I will turn your attention to the following video which displays how I feel quite eloquently.

This rather raw video captures Campaign Manager Richard Carlbom of Minnesotans United for All Families as he announces to campaign staff and board members that the vote on the proposed constitutional amendment to ban same-sex marriage in the State of Minnesota was too close to call. As he was about to end his remarks and tell everyone to go home and get some sleep, Carlbom was told by the campaign’s communications director that the A.P. just called it. An ecstatic, joyous, tear-filled celebration ensued. This was the first time in U.S. history that an anti-gay marriage constitutional amendment had been defeated.

I can relate to this expression of pure joy on so many levels and for so many reasons, but I will leave that for yet another blog…

I am a professional photographer, obsessed iPhoneographer, freelance writer and website designer located in Northern, California. END_OF_DOCUMENT_TOKEN_TO_BE_REPLACED
This entry was posted on Wednesday, November 7th, 2012 at 8:19 pm and tagged with 2012 election, democracy, Elizabeth Warren, equality, Mazie Hirono, politics, Sara Gelser, Tammy Baldwin, Tammy Duckworth, Tulsi Gabbard, women's rights, Women's Suffrage and posted in Musings. You can follow any responses to this entry through the RSS 2.0 feed.
« Readying Myself for a Knock-Out-Drag-Down Brawl With All You Self-Appointed Body Snatchers
Soliloquy Continued… »

3 responses to “We Are Women and We Roared!”