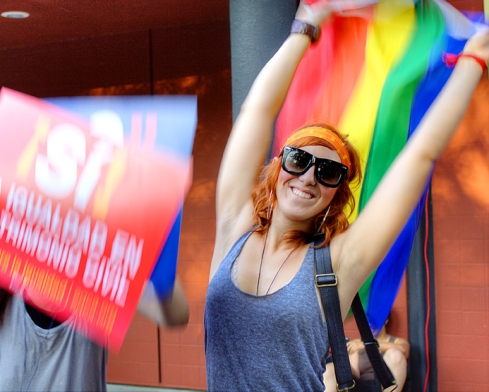 There are certain issues in our country that become blown out of proportion the minute one belief system is challenged by its opposite.

Belief systems are religious, philosophical or ideological thought processes that drive the personal choices made by human beings. Nothing more; nothing less. Belief systems can vary greatly and may be molded and influenced by one’s familial upbringing; by one’s personal life experiences.

So when big arguments ensue based on personal belief systems, ergo personal choices, and a group of like-minded people who share the same beliefs attempt to control or quash these groups or individuals who make certain choices based on the opposite belief system, is there a system in place that serves to protect the freedom of choice for that group or individual?

There is no inherent right or wrong until one weighs a set of beliefs and choices made in light of some accepted form of moral or legal compass. In our country, the accepted compass is a legal compass. The Federal court system becomes the protector of individual freedoms and the slayer of ugly giants who attempt to tread on said freedoms that are enforced by said court.

So when certain ugly giants decide to stomp on life choices made by groups who subscribe to opposite belief systems, sometimes those ugly giants do everything in their power to prevent those groups or individuals from living their life in the way they have chosen, and a conflict ensues.

Quite often the ugly giants spout claims that the life choices of those who ascribe to opposite belief systems from their own are harmful to specific institutions or individuals.

Take interracial marriage for example. Prior to 1967 (yes just a mere 44 years ago), the ugly giants of certain States had decided it was unlawful for white people to marry non-white people. The ugly giants created this law in response to interracial marriages that began to occur across the Nation. The presumption was interracial marriage would be harmful to society and ran counter to moral turpitude. But this ugly giant fell when the U.S. Supreme Court ruled in Loving v. Virginia that “Virginia’s anti-miscegenation statute violated both the Due Process Clause and the Equal Protection Clause of the Fourteenth Amendment.”

Note the Court did not base their ruling on a set of religious beliefs nor on an interpretation of the document that supports those particular beliefs, the Bible. Instead they based their ruling on the single document and its subsequent Amendments that is used to weigh in on matters of the protection of individual rights in this Country, the U.S. Constitution. The Amendments of which clearly separate Church and State.

No matter what one believes, which religion one practices or what set of moral values one adheres to, in the end it is purely a matter of the law.

A very big question comes to my mind when I mull the motivation behind this ugly giant that tried to put a stop to interracial marriage. How in the world would the personal choice a white man made to marry a black woman have a harmful effect on the citizens of the rest of our country? Did their personal choice harm the marriage or family of any other couple in the U.S.? Without a doubt the answer is a resounding no. So what truly motivated the ugly giants of Virginia and other like-minded entities to charge people with felonies and imprison them for marrying who it was they loved and desired to marry? This was in no way about upholding religious morality. It was ruled discriminatory and it smelled of bigotry. Plain and simple.

That same bigotry and discrimination continues to this day as the ugly giants attempt to quash the rights of groups and individuals who think and act differently than they do.

Take gay marriage for example. The ugly giants used a tool called Proposition 8 in order to keep a person of one sex from making the choice to legally marry a person of the same-sex. The campaign to pass that particular Proposition was pushed clearly by the claim and unfounded fear that gay marriage would be a direct threat to traditional marriage and family values so it was imperative the State define marriage as only between one man and one woman.

Fortunately, Proposition 8 was struck down on appeal at the Federal (District) Court level. When weighing its merits against such precedent setting cases as Loving v. Virginia, the Court recognized discrimination based yet again on the violation of both the Due Process Clause and the Equal Protection Clause of the Fourteenth Amendment.

Ugly giants don’t always fall that easily. In order to save ugly face, they will continue to pursue appeal by grasping at straws even though the merits of their case are not Constitutionally sound. This was apparent in their feeble attempt this week to have Judge Walker’s Prop 8 decision overturned in light of the fact he is a gay man. They argued Walker should have recused himself from hearing the original case because of his sexual orientation. If that were reason to recuse, then an African-American judge should never hear a case on racial discrimination; a female judge should never rule on a case involving women’s rights; a divorced judge should never make a decision in a divorce case; a Christian judge should never rule on a case that involves the division of Church and State; a woman who was raped or sexually abused should never serve as a judge in a rape or abuse case; and a straight, married judge should be disqualified from presiding over a Prop 8 trial because he would conceivably have an interest in protecting his own marriage.

Fortunately, the legal compass has once again weighed in on the side of the underdog. Judge Ware released his ruling on the plaintiff’s attempt to overturn Judge Walker’s Prop 8 decision this sunny Tuesday afternoon. Walker’s ruling has been upheld. Upheld in a court of law where the important decisions that affect the freedoms and liberties that have been granted to all citizens are made in our country. Not in a church, not in a school, not at a rally that boasts signs of hatred and contempt; but in a court of law where ugly giants are most often put to death.

Let the absurdities continue. I have no doubt, like all the ugly giants before it, this one too shall fall one day for good. And when it does I will be watching and cheering, and its demise will create a resounding echo that will be heard around the globe. And maybe. Just maybe. The ugly giants will finally learn to live and let live.

I am a professional photographer, obsessed iPhoneographer, freelance writer and website designer located in Northern, California. END_OF_DOCUMENT_TOKEN_TO_BE_REPLACED
This entry was posted on Tuesday, June 14th, 2011 at 12:00 am and tagged with interracial marriage, Judge Walker, Loving v. Virginia, marriage equality, Prop 8, same sex marriage and posted in Musings. You can follow any responses to this entry through the RSS 2.0 feed.
« A Boy and His Snail
Whether You Like it or Not, Baby We Were Born This Way »