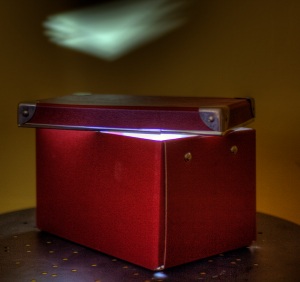 What is it with the human need to place people into tiny little boxes?  We are all guilty of it at one time or another.  Is it a desire to control that which we don’t try or even want to understand?  Or is it due to some dark, slithery political or religious agenda that can only convince the masses to follow along by lumping individuals into an ugly, vile pile of half-truths and generalizations?  Whatever the motivating factor, we need to wake up and realize that everything in life isn’t simply black and white, good or evil, right or wrong.  There are many shades of gray.  In fact, life is a veritable rainbow of beliefs and actions.  And there are many hues and tonal qualities within that same palette of primary colors.  Personally, I would much rather live in a world surrounded by vibrant 3-D color than on a highly predictable, monochromatic and single dimensional scale of existence.

I don’t want to be perceived as standing on some soap box of righteous indignation, on the contrary, I am as human as they come.  But it disturbs me to no end when assumptions are made about people based not on personal interactions, but instead on what others have written or said about them.  To me it is a great example of sheep and shepherd.  Instead of using one’s own critical thinking skills and freedom to make that decision out of direct personal experience, we slam the door shut before we hold all the facts in hand.  We buy into the rhetoric and are swept up as sheep into the ranting dialogue instead of taking a deep breath and listening, really listening, to what is being claimed by all.

Perhaps we place people into tiny little boxes out of fear.  Fear of the unknown or of the “what if’s”.  Fears exacerbated not by personal experience, but by what one has witnessed on a biased news station report or read in a one-sided newspaper article or book.  We have all heard the word propaganda, but how many of us realize we are being fed a heavy dose of it on a daily basis through news networks that carry a singular political agenda?  Want to form an intelligent and fair opinion?  We need to remain open-minded enough to study both sides of an issue before we simply jump to a conclusion.  Yes, our fears can also be a result of first hand experience, when we come face to face with the ugly side of one certain individual personality.  But is it really fair to allow that singular experience to spoil the whole?

Granted, there are groups of people who do merit our fears, our repulsion and our condemnation.  Those groups are usually led by extreme zealots whose message is nothing less than hate and harm and should be condemned by all of us no matter what our religious, political or personal persuasion.  But we must be careful to understand that labels are chosen by these extreme fundamentalists for a reason.  If they can function under the guise of Christianity, Islam or some other well-established religious entity, then they are more likely to attract a core of extreme followers who wallow in the dogma and rationalize their cause as a just one in the name of religion.  The danger here is when we automatically throw all who claim to be Christian or Muslim or whatever into one of these extreme boxes within our minds.  Not all Christians hate gay people, not all Muslims are terrorists, not all Germans are Nazis, not all Mexicans who cross our borders are rapists or criminals, not all Catholic priests are pedophiles, and gay people are not out to recruit your children.  I think you get the picture.

We are a country divided.  We seem somehow to have lost touch with reality.  Everyday there are new accusations and the spewing of political and religious rhetoric from the “right” and from the “left”.  We all teeter on the edge of this enormous precipice gasping in fear.  Yet we are all guilty of lengthening this divide through both our actions and our inaction.  What ever happened to productive dialogue?  The kind of dialogue that doesn’t simply froth at the mouth with emotional angst, party line rhetoric or religious indignation?  Isn’t it time for us to get back to the basics and try to find some sort of common ground once again?  It’s past time to throw away all those divisive comments that do nothing more than push us face first into the quagmire of head banging hopelessness.

Personally, I am tired of the bickering, the pigeon-holing, the finger-pointing, the proselytizing of morality by a handful.  No, I am not just tired, I am exhausted.  Don’t we owe more to our world and to its inhabitants than to waste our energies on stuffing those we don’t agree with, or clearly don’t understand, into tiny little boxes and try to nail the lid shut tight?  Our country needs every last one of us right now.  Our people are starving, our oceans are bleeding, our souls are shattered.  It’s beyond time to stop the nonsense, come to some semblance of resolution, and move forward in a constructive manner.  Let’s take our free-floating anxieties and rope them in, not with a bottle of Xanax, but with a tether to some statistical reality.  I would much rather begin to base my own decisions on logic than on some unseen suspicion and angst that has pervaded our country of late.

That timeless saying “Live and let live” does not simply mean put your blinders on, turn your back and let everyone do their own thing.  No, I believe it means we each have a responsibility to shoulder in order to ensure every American, no matter what race, religion, sexual preference or political persuasion,  is allowed to exist and to live under the veil of freedom.  The same  freedom our forefathers intended us to have, with liberty and justice for everyone and not just for a select few.  Let’s all begin to think outside the box.

I am a professional photographer, obsessed iPhoneographer, freelance writer and website designer located in Northern, California. END_OF_DOCUMENT_TOKEN_TO_BE_REPLACED
This entry was posted on Tuesday, June 8th, 2010 at 12:20 pm and posted in Photography. You can follow any responses to this entry through the RSS 2.0 feed.
« Seeing the Homeless
Loves Little Lessons »