Black Tar and A Silent Spring 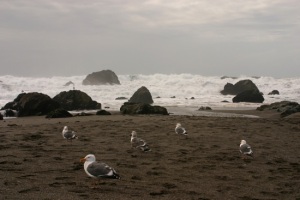 “To stand at the edge of the sea, to sense the ebb and flow of the tides, to feel the breath of a mist moving over a great salt marsh, to watch the flight of shore birds that have swept up and down the surf lines of the continents for untold thousands of year, to see the running of the old eels and the young shad to the sea, is to have knowledge of things that are as nearly eternal as any earthly life can be.” ~ Rachel Carson

It is nesting and spawning season in the Gulf.  Thousands of fish and shorebirds make their way to the delicate wetlands and marshes along the Louisiana coastline to mate and lay their eggs.  Dolphins and endangered Sperm Whales also make their home there and rely on marine life to survive.  Several generations of men and women have made their living by fishing these waters and tourists have flocked to pristine beaches beyond barrier islands to lend a boost to an already soured economy.  But something is different this year.  A thick black tar oozes uncontrollably from the ocean floor, and coats everything in its path.  In the process some of this thick layer of goo sits far below the surface and sucks the oxygen from the water which creates marine dead zones.  Some 88,502 square miles are now closed to fishing due to the spill, which has a direct impact on the livelihood of thousands in one of our country’s largest fishing grounds.  Though humans are aware to steer clear of the mess, birds and marine life were never served such notice.  Creatures of instinct continue their journey into the polluted waterways and slowly, most likely painfully, succumb to the now ingested sludge that clogs their airways and coats their feathers.  So far 491 birds, 227 turtles and 27 mammals, including dolphins have been found dead along the Gulf Coast. 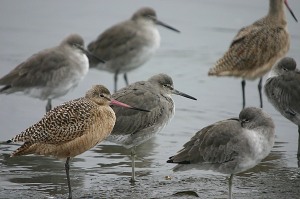 This is not the first time we have faced a tragedy that impacts our environment.  There have in fact been many,  including the Exxon Valdez.  However, scientists estimate this is a disaster beyond our current comprehension.  Millions of gallons of crude oil have already spilled into the Gulf with a loosely estimated total of 20 million gallons and still continues to flow without interruption at this moment.  That is the equivalent to one Exxon Valdez disaster every 3.5 to 2.4 days.  Add to that the millions of pounds of toxic deep water dispersants that were sprayed right on the surface of the Gulf waters and one can only imagine the negative effects this toxic stew will have on the future of the Gulf and its inhabitants.

What makes this disaster even more incomprehensible to me is why it ever happened in the first place.  BP had an atrocious safety record prior to the Gulf oil spill.  The company had chalked up 760 OSHA violations even before the Deep Water Horizon rig exploded and killed 11 of its employees.  Why in the world were they allowed to continue to do business on U.S. soil with such an egregious safety record?  One can only speculate, but the exchange of untold amounts of money seems most likely to be the culprit here.

BP estimates the oil will continue to flow until the end of August at which time they hope to have two emergency wells drilled to intercept and control the flow of oil.  But as history has shown in other parts of the world with similar well blow outs, it has taken repeated attempts and a minimum of 6 to 9 months in most cases to successfully intersect the main well.  That would mean millions of barrels of oil spilling unchecked into the Gulf through hurricane season, into December and possibly beyond.

Once the well is finally capped, there will undoubtedly be a collective sigh of relief.  Cleanup will continue, fisheries will be reopened, tourists will begin to flock back to the once pristine coastline and life will go on.  Following a barrage of public relations apology ads, Americans will feel a sudden soft spot and continue to spend their hard-earned dollars to fill their fuel guzzling gas tanks at BP-owned service stations.  Several years from now this disaster of before unseen proportion will be but a distant memory for the rest of the millions of Americans who live far from ground zero in the Gulf.  Shouts of “Drill Baby Drill!” will once again rise out of the dark pits of society and our love affair with crude oil will continue while laughing in the face of valid energy alternatives.  We will continue our dizzying spiral towards what Rachel Carson called our “Silent Spring” and ignore the warning signs with our “if I can’t see it, then it doesn’t affect me” attitude.  All the while large corporations, politicians and special interest groups will still pad their pockets with green, stocks will rise, more lives will be lost in the name of protecting our oil interests, and savvy billionaires will be secure in the knowledge that this oozing sludge is worth far more than any human life, far more than gold.

But wait!  At this very moment we are standing at a fork in the road and it is up to us to make a conscious decision that will have an impact on our planet and that of our children.  As Rachel Carson stated:  “We stand now where two roads diverge. But unlike the roads in Robert Frost’s familiar poem, they are not equally fair. The road we have long been traveling is deceptively easy, a smooth superhighway on which we progress with great speed, but at its end lies disaster. The other fork of the road — the one less traveled by — offers our last, our only chance to reach a destination that assures the preservation of the earth.”  Which road will you choose to travel?

I am a professional photographer, obsessed iPhoneographer, freelance writer and website designer located in Northern, California. END_OF_DOCUMENT_TOKEN_TO_BE_REPLACED
This entry was posted on Thursday, June 3rd, 2010 at 10:49 am and tagged with BP, Exxon Valdez, Gulf oil spill, Silent Spring and posted in Photography. You can follow any responses to this entry through the RSS 2.0 feed.
« In Honor
Seeing the Homeless »

2 responses to “Black Tar and A Silent Spring”